Quaver v0.13 has now been released! After almost two weeks since 0.12, we’re proud to share what we’ve got done. With in-game downloading, performance improvements, and a heap of bug fixes/quality of life changes, there’s a ton of updates in this time around, and we’re making insane progress on the game so far.

Restart your Steam client, and the game will automatically update for you.

You can grab the latest version of the game on GitHub. This time around we’ve provided a pre-compiled release, so all you have to do is download and run the game.

With that being said, let’s get straight into the updates!

Since the last update, the community has submitted a ton of bugs and features that you would like to see in Quaver. This update is dedicated to just that. Here’s what we’ve done:

The newest big feature in this update is the introduction of in-game downloading. Instead of heading to the website and manually downloading songs, you can now download mapsets directly in-game. For now, the search and filters function just about the same as the website, and we’ll be looking at implementing more filter options in the future.

During the alpha period, in-game downloading will be available and free to use for all alpha testers. After the period is over, we may add some limitations to downloading for non-backer users, such as a download limit per day. However, this is still to be decided, and we’ll cross that bridge when we get there. But for now, enjoy the downloading.

One of the most requested features was the ability to hide failed scores. You can now do this by heading in the Miscellaneous section of the options menu and toggling Display Failed Local Scores.

We’ll be adding a delete function for scores as well, however this is something we’ve done in the meantime, as users have requested it. 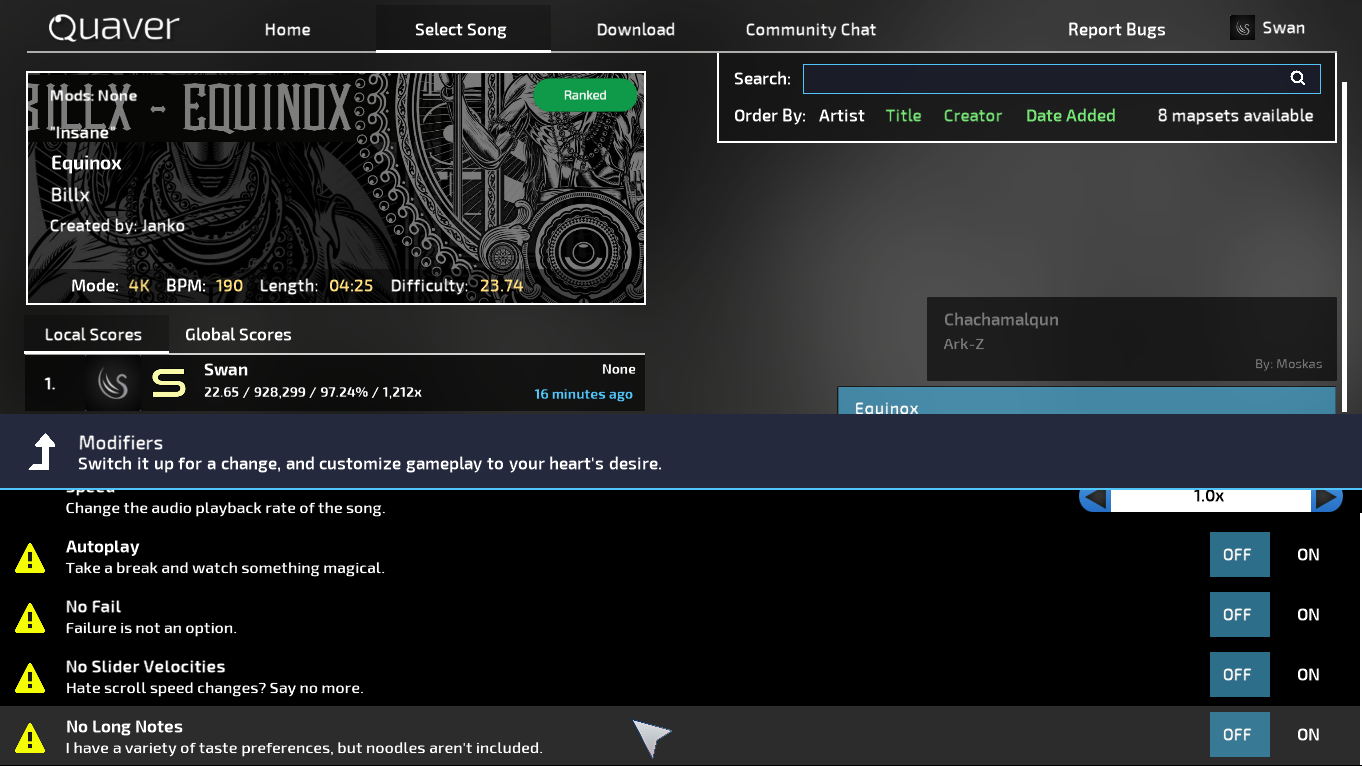 This update we’ve added two things related to modifiers. First, we’ve implemented a “No Long Notes” modifier. This mod will take an already existing map and remove all long/hold notes from it. This modifier is solely used for practice and will not be available to use during ranked play.

In addition, we’ve also added an icon that lets players know if a modifier is unranked. This was a highly requested feature, as many players were reporting that they were unaware if certain mods weren’t available to use during ranked play.

You can now import and export skin archive files to/from the game. This feature makes it easier for players to share skins with each other without having to go through the trouble of manually zipping it up yourself. The file extension for skin files are .qs. Just drag it into the game window during any of the menu screens, and the new skin will automatically import and activate.

Thanks to YaLTeR, playing Quaver on linux is now possible! The game is still pretty rough on that OS - especially when it comes to text, and we’ll be looking at fixing this very soon. At the very least, the game is now playable, and you can do so by compiling a build of the game.

In addition, we’ve also added a minor addition to user profiles on our website.

Starting on January 4th, 2018, we’ve began collecting data on the global ranks users have. You will now be able to see a user’s global rank progression over time on their profile.